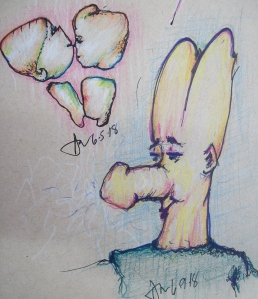 With a scent of cheese

(Which is good for your knees)

All to be at ease.

Let’s go out for some Chinese. 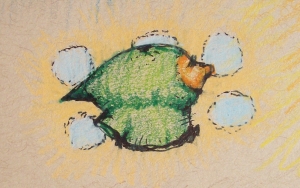 I’m not rollin’ in the hay

That’ll be the day

So I think I’m gonna stay

To avoid the fray

Come as it may

Sitting on the dock of the bay

There’ll be hell to pay 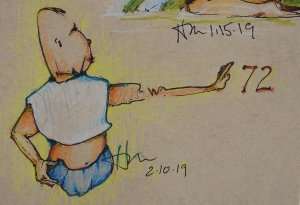 I wish I had a tape recorder in my head so I could record all the shit I think about, and then play it back at my leisure to evaluate if there was anything of socially redeeming value left behind. From what I do recall, the contents are usually fairly shallow, and if they hold my attention at all, mainly consist of mesmerizing fantasies.

Wouldn’t it be cool if there was a way to slow it all down  and evaluate each thought that strolls through your mind?  You could score each thought on a scale of 1 to 10.  One being shear bullshit, and ten something worthy of action.  Then ya wouldn’t save to save them up in your memory bank (mine is bank-rupt).  I can sorta do that now, but usually they come whippin’ by so fast I can’t focus on one for the distraction of another.  Then there’s the instant evaluation as to like or dis-like, with clinging on to the ‘likes’ and jettisoning the ‘dis-likes’ before they grow into paranoia.  Right now I’m consistently scoring in the high 3’s.

…I wrote this the night before my seventy second birthday – Birthday Eve.  Boy, I could sure go for some birthday cake right about now. 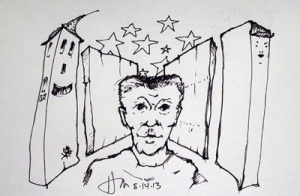 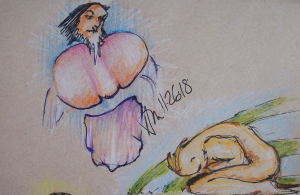 If there’s one thing I can’t stand, let alone understand, it’s hypocrisy.   Jesus couldn’t stand it either, and sure jumped in the Pharisees’ shit, not hesitating to call out their hypocrisy.  When he was really on a roll, he’d call them the ultimate put-down: whitened sepulchers – looking all nice and freshly painted on the outside, but inside, a tomb filled with rotting corpses, flesh consuming worms and all other manner of unclean things.  Jesus is probably rolling over in his grave at the state of affairs in his favorite county America.

I can understand the double standard if for no other reason that if one standard is good, two has gotta be better.  But you can’t claim be in favor of balanced budgets, then when it’s your turn to be in charge, spend like there’s no limit to tax cuts for the wealthy.  You can’t claim to be a righteous and holy people, and elect a godless, self-centered, compulsive liar who is an adulterer, and fornicator who prefers the company of harlots, and think that’s just fine because he’ll fill the courts with pro-life judges.  Jesus like harlots too, but he didn’t make them sign non-disclosure documents.

Valentines Day (now and then) 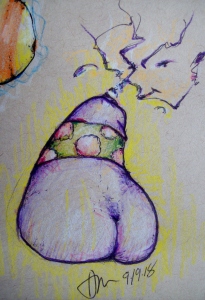 Today is Valentines Day, but by the time you see this, Cupid will have long flown past with an empty quiver full of arrows.  That’s because I’m writing this out in longhand now, but by the time I press the publish button, it will have become then; actually right now is when I’m transcribing this, with the publish button thingie being not quite now.  So when I finally do publish, this too will become then and the final score will be one now to two thens.  Timeliness, sometimes important when doing Holiday posts, doesn’t concern me that much; hey, when you’re a few days short right off the bat, what’s a few more? 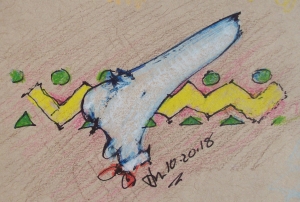 If I don’t write stuff down I’ll forget it.  Most of the time that’s just fine with me.  But if I really wanna remember something I better have a written reminder, and preferably, one I won’t overlook.  Can’t just put a note on a loose pile of papers, cause sure as shit I won’t see it.  No, it’s gotta be a big old sign featured prominently like the one the Wife put on our refrigerator door:  Push Me Closed.  We have an older model fridge, which sometimes doesn’t close all the way because it’s so full of half eaten crap ya gotta rearrange everything inside to get what ya got out back in.  It would be a shame to leave the door ajar, and let all the junk you ain’t gonna eat go bad.

Sometimes when I walk by the fridge, I wonder “Push who closed?”  That reminds me, I better check the fridge to make sure it’s closed…Didn’t write it down.