Tri-Phoria and the Wonder Bra

Back in the day when I first started blogging, I did a lot of parody posts about all the weird shit I saw on early morning Cable TV.  I get up pretty early in the morning, and before the gym opens at 5:00 a.m., I do a lot of stretching exercises in front of the tube.  And at 4;30 in the morning, it’s unbelievable all the crap they’re trying to sell ya.  I can live without the newest space-aged vacuum cleaner, and already have well cut abs (they’re just hiding under a layer of fat).

But when it comes to shit like “No Evil Oil”. How can I not help to get a little sarcastic, and verbally ream out the slick, southern, hoodoo preacher who’s selling that snake oil.  Great blog fodder.  Butt (a different type of but, butt the same) who can pass-up on something specially prepared, prayed over, and with hands laid upon by twelve Elders, that would bring ya nothing but good luck, and keep ya safe from all manner of harm?  I wanted to take a bath in that stuff.   But when they announced that it was sold by the ounce (yet probably made by the bath-tub full in someones trailer), and would cost ya a “generous gift” to this fake’s ministry, I decided to stick with my old tried and true “All Evil Oil”, which I’m using in full strength today.

I also found out about , and did posts on the “Wonder Bra”, or “Genie Bra’, same difference, just made  in different parts of China.  And…Tri-Phoria, the personal hand held vibrator from the folks at the Trojan rubber company (not to be confused with tire manufacturers).  those were so popular, that I did two posts on Tri-Phoria, mainly because the commercial for it was so outrageous, “blowing back the hair” of a bunch of little harlots raving about it at a bridal shower.  The Bride-to-be looked on in amazement, soon coming to the conclusion, “Who needs a man?”  Check out these little harlots.  It’ll Blow Your Hair Back

Anyway, like the Church in the Middle Ages, I decided it was time to trot these relics out for the faithful.  To restore faith in Hansi, that he’s not totally gone over to a drawing only blog, but still has a few satirical marbles left in his head.  You may want to check out my 1950’s Japanese Godzilla/Rodan movie re-working called ‘Tri-Phoria versus Genie Bra“, complete with men in monster suits stomping the shit outta toy tanks and villages.

Well I’m just waiting now, like a monk hoping for that  ‘poor box’ to get filled.  Sure wanna   get a lot of views on this one.  Even added some new tags like: filth and, bad taste.  Don’t wanna leave anyone out 🙂 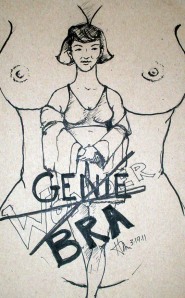 infomercials…again. And low and behold what do I see, but The Genie Bra…”What all women wish for”. I know I’m gonna catch hell on this one, cause its going to offend just about every woman that reads my trash. But what the Hell.

And speaking of Hell, that reminds me of an old joke wherein a condemned sinner arrives in Hell, and was shown all the tortures one would have to endure throughout all eternity. Satan showed this poor soul all the afflictions as mentioned by Dante in “The Inferno”, and is shocked. Until he is shown a room full of people sitting on huge piles of shit drinking coffee. The sinner says, “Now I can do that for all eternity. I loved coffee and had a government job”. [Probably the reason he was sent to Hell according to Tea Partiers, who feel government workers don’t do shit, and just sit around all day waiting for those ‘lavish’ retirement plans to kick in.] Sooo…he chooses the dung heap, and has a seat. All goes well for him until a bell rings, and an announcement is made: “Coffee break is over, everybody back on their hands and knees.”

This is about the revolutionary bra called the Genie Bra, and it was a show about two of my favorite subjects, the ones that men can’t live with or without. And it is hosted by two women giving testimonials as to the bra’s wonder [not to be confused with Wonder bra].  Wow what was cool is that the wife is out of town for a few days, and I was able to turn up the volume loud enough to actually hear what they were saying at 4:30 in the morning [must be a lot of ladies up early too].

It got even better when they had models come out in sarongs, who actually disrobed to show off this product . Sweet. Can’t get much better than that without having to confirm that you’re over 18 years old to enter.

This simple product is apparently able solve a multitude of ‘support’ problems, even for those of us/you who are well endowed with DD cup size, and in need of a serious “over the shoulder boulder holder”. No more under arm ‘spillage’ (body fat escaping captivity), no more unsightly bra lines, just nice, firm, uplifting/ed gravity defying boobies.

Should one only be an A cupper, well this device solves the problem of lumpy padding; (kleenex) stuffed in there, and gives ya a more fuller, natural look. That’s because the Genie Bra has magical cleavage creating special fibers woven into it.

The best part is, if you order now, via phone, not only would you get this product for a mere $59.99, but they’d throw in a tan and black on too. [Guys just love a woman in black]. But hold on…to make this deal even more irresistible, and if your credit card was handy, they’d throw in one more of each. That’s right, 6 Genie Bra’s for a mere $60…if you order Now. Don’t ya just love that sense of urgency these guys use? Along with the testimonials (from probably paid actresses), how could one not order them right now; while supplies last. [Supplies usually last till they’ve made a killing, and get out of town.]

That’s when I started to wonder. When my wife announces that she needs new bras, I shudder, and start to worrying about having to mortgage the house. Good bras don’t come cheap, do they ladies? But $10.00 bra’s ?? And for what is basically a sports bra. Well, I’m a good sport, and that’s $5 per breast (shipping and handling not included); a better deal than buying them used at the thrift store. That’s awful!

What intrigues me most is not the product itself, but the sales pitch. Well, needless to say, I didn’t rush to the phone, but rather rushed to my computer and drawing pad to chronicle this shit. But, you’ll never guess what happened. The following early morning I saw an Infomercial for, hold on….The Ah-Bra. No shit. It was the same damn product, and 6 for $60, as the Genie Bra. What Chinese sweat-shop are they cranking out these things in?? Remember the Wonder Bra?