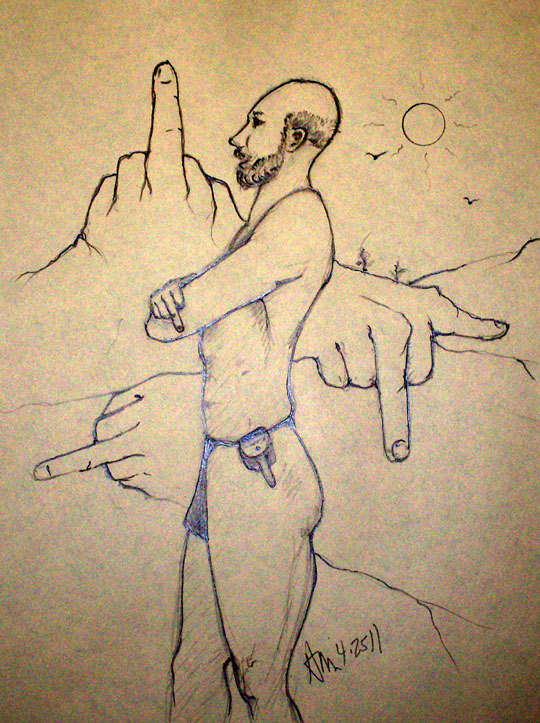 The Finger.  I hope the above drawing isn’t so subtle that we don’t know what we’re talking about here.  But the term kinda sounds German to me.  But they’d probably say something like das phinggerer.  But actually, the finger (middle finger salute) or “bird” has been around since Greek and Roman times, and in Latin, was called “digitus impudicus” (the impudent finger).  This is not to be confused with Biggus Dickus of Monty Python fame, despite what they may seem to have in common.

When I was a little kid, giving someone “the finger” was a big deal, and usually resulted in a fight.  Unless, you gave it at a considerable distance, and were pretty fast on your bicycle.  As a teenager, I preferred the term “bird”, which instead of being given, was flipped to someone.  Again, preferably done at a distance for safety reasons.

In ancient times, the display of the middle finger was a sign of humiliation, and was used liberally. The  Roman Emperor Caligula, a  ‘pioneer of perversity’, often made his subjects kiss his middle finger instead of his hand; he was assassinated shortly after that little number.  The finger went underground during the Middle Ages, because the Catholic Church thought it holy when used during the Mass.  Can’t you just see a bunch of filthy minded peasants (Italians of Roman descent) just cracking up and laughing their asses off when the Priest flipped everyone in the congregation the Holy Bird on behalf of the Lord.

Well, enough pioneering in perversity, lets get our covered wagons to the point.  The Finger, or Bird, is basically a gift as it is something you give to another individual; be it by flipping or sign language.  So I’ve come up with an award, called “The Finger” which from time to time I’d like to give to individuals I find particularity deserving .

Guess who’s the first recipient?  I AM.  Yep.  If ya read my post on The Hershey Highway (which is not my way), you’d know I just had my annual digital rectal exam.  And the good ol Doc gave me the Bird right where the sun don’t shine.  Well, in case you’re wondering, everything is A-OK down there; or should I say Up there?

Timing is everything, and good old President Obama beat me to the punch by awarding the “Impudent Finger” to our next recipients: Donald Trump and the “Birthers”.   The President finally put this whole insane question as to where he was born [Honolulu Hawaii] to rest by releasing  (flipping them) his “official birth certificate”.  What’s astounding is that the Donald is taking full credit for forcing the issue, and is now busily questioning Obama’s college grades and transcripts.  Who was that Roman Emperor that fiddled while Rome burned??

So with a big hearty Fuck You, please accept this award on behalf of myself and all other American citizens who think there are bigger issues that need to be dealt with.

BTW…Feel free to copy and print this graphic, and award it to any group or individual you consider worthy of recognition.