The Bible is a pretty trippy book and has lots of interesting stories in it.  Most of the stories don’t make much sense, especially if ya read the King James Version with all its Thee, Thy and Thous. But the KJV  does give you a hint of what God would sound like if he actually talked to you [“Hansi, Why doest thou such abominations in the sight of the Lord?”], but also gives one an insight into how God thinketh.

Sodomy is also a cool word, mainly because it’s antiquated, and in order to appreciate it’s full meaning, you got to know a little about the Bible (even though the word itself  is not in the Bible), or at least remember what you were told in Sunday School.  It’s also a legal term for anal intercourse and was in the California Penal Code as an offense that was illegal if confined in a correctional facility.  “Penetration with a foreign object”  is also one of my favorite sex crime Penal Code terms; leaves a lot to the imagination as to to who or what that might be.

Anyway, back to Sodomy, or more properly Sodom and it’s suburb Gomorrah.  Apparently those two towns were so filled with homosexuals, that God had to step in and change their sexual preference by burning them up with fire and brimstone (whatever that is); for there was no praying away the Gay in those days.

So let’s blow the dust off our Bibles, and take a look at the real story.  It will bloweth thy mind.  The story starts in Genesis 18:20, right after Abraham, who used to be called Abram, put the ham to his wife Sarah’s maid, Hagar, and got her pregnant.  Well God tells Abraham the “the cry of Sodom and Gomorrah is great, and because their sin is very grievous”.   Doesn’t say what their sin was, probably because the Ten Commandments weren’t written yet.  But it must have been far worse than screwing the help at age 86.

What does Abe do?  Give God a high five and say right-on Lord?  Nope, true to his soon to be father of the not only the Jews, but Arabs  fashion; he starts bargaining with God.  “Wilt Thou also destroy the righteous with the wicked?  Peradventure there be fifty righteous in the city: wilt thou also destroy and not spare the place for fifty righteous therein?”  Gen 18: 23-24. [Can you hear the Yiddish accent?].  God could live with that, but Abraham started hedging his bets, and said How about forty-five?  And so it went till Abe talked God into sparing Sodom if there were as few as ten righteous people therein.  Talk about buying wholesale only, them be pretty good odds also.

Chapter 19 begins with two angels showing up at Sodom, who were met by Abraham’s nephew, Lot.  No wonder Abe was trying to drive such a hard bargain.  Lot asked the Angels to stay with him at his house rather than just in the street as they preferred, and made them a feast.  After a mouthwatering meal of unleavened bread, it was bed-time.  But who shows up at his door but all the men of Sodom who called out to Lot, “Where are the the men that came in to thee this night?  bring them out unto us that we may know them.”  Gen 19:5.  Getting to know someone in Bible days wasn’t like, “Hi, I’m Sammy the Sodomite. What’s your name?”  Nope!  that’s because “Knew” meant “Screw” in those days, so what they really meant was, “Hi, Welcome to Sodom. Now it’s time to get sodomized”.

warned Lot that he better get his family together and prepare to leave cause God was going to destroy the city.  So Lot got his wife and two daughters (who were apparently married but still virgins), but not his sons in-law, who thought Lot was nuts and wanted to stay.  [They were probably gay too, so that explains the unconsummated marriages].

To make a long story short, the four of them flee.  God rains down fire and brimstone (sulfur) on Sodom and Gomorrah.  Turns Mrs. Lot into a pillar of salt for looking back at the spectacle.  And Lot and his daughters end up living in a cave.  But the story doesn’t stop there.  Having ones wife turn into a salty phallus must left a bad taste in lot’s  mouth cause it turned him to drinking.  And his two daughters?  Gotta read verses 31-38.  With all the local men burnt to a crisp, they had no one to make babies with, so they took turns getting Dad drunk and each have sex with him.  I guess incest was OK only if you wanted offspring.

So what was the sin of Sodom?  Let’s see.  Uncle Abe was boinking the maid.  The men of Sodom were buggering each other, and Lot was banging his two daughters.  Must of  had something to do with sex, but adultery was yet to become illegal in those pre-Mosaic days.  Was it homosexuality?

NOPE…”say what?”   Not according to God’s prophet Ezekiel.  Check out Ezekiel 16: 49-50.  “Behold, this was the iniquity of  thy sister Sodom (speaking of Jerusalem), pride, fulness of bread, and abundance of idleness was in her daughters, neither did she strengthen the hand of the poor and needy.  And they were haughty, and committed abomination (?) before me…”.  Hot damn!   Sure seems like when it comes to screwing, God is mostly concerned that the poor and needy not be on the receiving end of it.  And taking care of the poor and needy?  Sure sounds like the Good Lord is a socialist to me.

Whoa…If I was Govenor Perry, the Newt, or some fat-cat on Wall Street I’d sure be changing my ways before some fire and brimstone gets rained down upon my ass.  Read it for yourself.  It’s the Word of God; I Shiteth  thee not. 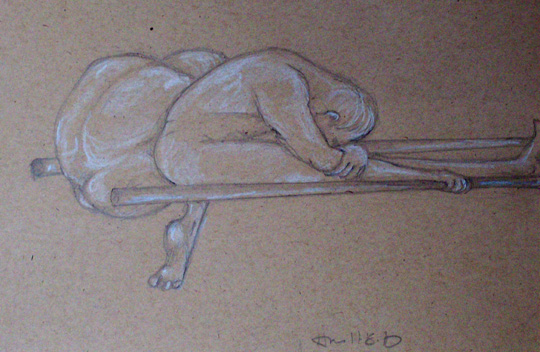