I got a phone call recently telling me that I just won the lottery and there was a 25 million dollar prize just waiting for me. 25 MILLION DOLLARS!!! This was my lucky day, and I was the luckiest person on earth cause I didn’t even buy a ticket, and presto outta the blue I’m a big winner.   How cool.  I told the guy to send me the check ASAP, cause in the two minutes I was on the phone, I’d already spent half of it, and that money was already burning a hole in my pocket.  Well hold on Bonzo, it wasn’t that easy.  See, because of technicalities, fees and a host of other impoverishing bullshit, I needed to send them some money first in-order for the (my) check to be released to me.   Needless to say, my enthusiasm quickly diminished as a little voice in the back of my head started screaming FRAUD!

After declining my fortune and hanging up, I went on Google (the source of all knowledge) and indeed verified that this was a common scam, and yes, you never get something for nothing.  I vowed revenge next time.

Well, sure as shit, there was a next time; I guess they got tired of pretending to be Windows technicians.  So when the guy with the heavy Indian accent told me I was a winner, I expressed my joy and utter dis-belief of such sudden good fortune with every four lettered word and expression I’d ever heard in a junior high school locker room or seen written on a bathroom wall.  “Well I’ll be dipped in shit” was my first response, and it took a nose-dive into the gutter from there covering all orifices both coming and going.  Every foul, crude, tasteless and disgusting expression I could think of came out of my potty mouth in a gigantic cosmic dry-heave of profanity and filth.

Funny thing was, despite all this verbal sewage, the guy on the other end seem totally unfazed.  Maybe it was the language barrier ( I was adding a lot of southern style twang ), or maybe it went over his head and he was just patiently waiting for me to give up my credit card number.  Anyway, after my verbal diarrhea dried up, I told him to phuck-off and hung-up the phone.

I know a lot of you may be thinking, “Now Hansi, that’s an angry response, and all them cuss words wasn’t very nice.”  Well maybe.  But this guy was a crook who was trying to rip me and other unsuspecting Seniors off.  I wanted to give him the message that ya Don’t Phuck With Old Folks! 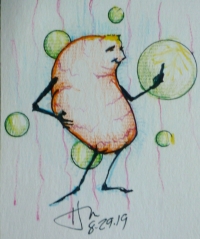 I’ve come out of blogging retirement lately, not because I’ve become bored with the use of medical marijuana for all my ills and suffering, but because something really pissed me off, and what better way to vent than by blogging about it.  One of the worst things that can happen to ya when you’re enjoying the therapeutic benefits of herbal medications, is to get a phone call from someone trying to sell ya something.  And even more worse (not to be confused with even more wurst, which often times happens when the ‘munchies’ kick in), is getting a phone call from someone trying to rip you off right in the middle of  ‘In A Gadda Da Vida’.

A while ago, I got a phone call from someone with a thick Indian accent, stating that they were a “windows technician”, and that there were some virus files on my computer which needed immediate fixing, and that they would walk me through a repair if I’d immediately get on my computer and follow their directions.  Oh shit!  Even though I wasn’t blogging any more, I still had a ton of music mp3’s saved, and would hate it if I lost all that good music from the 60’s.  But then I started thinking: Since when does Corporate America ever call ya to replace the shoddy crap they’re sold unless they’re threatened by a class-action lawsuit?  I decided to pass.

Sure as shit, a few days latter, I get another call from a “Windows technician” with same spiel.  Thick Indian accent, I could almost smell the curry wafting over my phone line.  Reminded me of a few cheap motels I’ve stayed in.  Playing along, I let them go on a bit, then layed into them.  Asking how things were in India (pronounced In-ja), was it monsoon season, and accusing them of being criminals, questioning whether this shit was legal over there.  Really ripped them a new one.  But, they got in the last word.  The guy on the other end called me a ‘mother-fucker’ and hung up.

Okay, I was pissed.  Maybe he was technically correct in calling me that for I do have children, and, have had sex on a few occasions with their mother (you could count the number with your fingers and the toes of your right foot (not to worry if you’re an amputee – you’d be in the ball park), but being called a mother-fucker is fightin’ words.   I swore revenge.

[From here on out I will not use the F-word, as my intention is not to offend you my dear reader, but the mother-phucker who call me a mother-fucker].

I was ready.  And sure as shit, so were they.  I got yet a third call, a woman this time, and was very polite.  But before we could go any further with my computer repairs, I told her that one of their ‘technicians’ called me a mother-phucker.  And before we could proceed any further, I needed an apology from the mother-phucker who called me a mother-phucker.  “Is it a practice of the Microsoft Corporation to call their customers mother-phuckers?”  “Is the company run by foul mouthed mother-phuckers?” I asked.  I went on to tell her that ‘mother-phucker’ was a very offensive word, and while that shit might fly in India, it sure don’t over here in the good ol U S A.  “In America”, I said, “Jesus is our god, not some goddamned elephant, and He don’t take no liking to folks calling other folks mother-phuckers unless we’re going to war with them then its open season on their phucking asses”.

I guess you get the picture.  I wouldn’t let her get in a word edge-wise without me using the M F-word.  It was better than the South Park movie.  Revenge was sweet.  Guess I showed them mother-phuckers.