Extenze “Works for me.”

I Know… the Z should be capitalized. And how would you know? Got zee site bookmarked? Written checks payable to: ? Maybe I’m a little paranoid about being sued…and don’t want to take chances. Anyway, this is a hallucination, not an endorsement or condemnation of any product.

Furthermore, before you all turn into a choir of ex-wives, and start the chant: “Is that all you ever think about Hansi; is penises and sex?” This is actually a clever blogger trick to get more views on my web-site…. Back to what all I think about; the answer is NO. I’ve written posts on Farting, Germany, and Poontang, as found in its various forms. Hmmmmm….That gives me an idea. Look for my forthcoming semi-autobiographical post on German Poontang I’ve seen while Farting.

Now back to clever blogging. I was going over my Word press 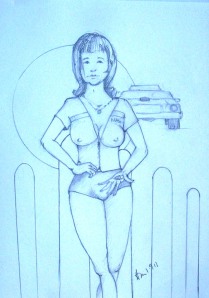 So, I was up early again and watched the Extenze 30 minute program, not just the info-infomercial. It had a NASCAR theme featuring, and you won’t believe it, His and Hers Extenze race cars. It featured a sparsely clad woman in a faux race-car suit; except hers only had hot pants (but not fire retardant), and a zippered top revealing how racy she really was. See, they were pushing Extenze for women too! I couldn’t quit wrap my mind around that one (hadn’t taken my medication yet). But my logic was as follows: If the stuff for men makes em longer, the stuff for women has got to make them…..well you know? I figured the whole thing was ploy to get both sexes addicted to their product….Guys take the pills to extend themselves; Gals must take their pills to extend themselves in retaliation, or self defense. And so on. The vicious cycle of dependancy ‘deepens’ until everyone’s wangs are literally bent out of shape [ I’ll let your dirty mind fill in the details; the “Man from Trent” limerick works for me].

What’s cool though is that they have made silver-haired former Dallas Cowboys Coach Jimmy ‘what’s His name.’ the Extenze Spokesman. Yep, “Mr Long Yardage” and “Deep in the End-zone”, has found his calling. Jimmy says, “It works for Me”. What Jimbo didn’t say was, “I use it.” Of course Extenze works for you Jimmy. You’re getting paid a fortune to push this stuff and probably have it stipulated in your contract, that these spots not air on any Sports Channels or after 5 am.

What I do admire, is that the Extenze folks got their demographics right. Who else is gonna be up at 4:00 in the morning except us old guys who can’t go back to sleep after getting up for the third time that night to pee? It’s not young kids, they’re all asleep, and worn out from a night full of debauchery. Extenze also features testimonials from older people, and that’s a bit comforting. You know the last thing an old Dad wants to hear is a team of twenty-something tramps going on about how size is all that matters. Makes ya wonder if this is all your “little girl” wants out of life. I don’t want to even think about it!!

Well that’s the end of this crank full of bullshit. Guess I’m gonna have to file this one in the Bizarre But True category, and extend to you an offer to reply.