Well, I think I’ve finally attained perfection and am now enjoying the bliss of reaching full Geezer-hood. Geezer is a term for a older man. It can carry either the connotation of age and eccentricity or, in the UK, that of self-education such as craftiness or stylishness (but we’re talkin’ about American Geezers in this here post so no style will be involved).

Who in their right mind would want to be a geezer? one might ask, when the 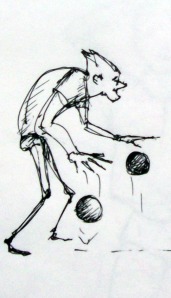 stereotype is that of an angry decrepit old man who’s highly opinionated, resistant to change and only feels happy after he’s off loaded a warm one in his adult diaper.   I have opinions sometimes, and strong ones, and even feel that people who don’t agree with me are  shit-heads.  But I know all “opinions'” have no real substance, are mental states and tend to enslave you.  For me, Geezer-hood is more about freedom than anything else.

The female counterpart to the Geezer is a Crone.  Stereotype: and elderly, cantankerous woman who is ugly and lives alone. But in older societies a crone was a post menopausal woman for whom  the flow of the menses has stopped; the Sacred Blood of Wisdom is finally retained inside the body, and the woman herself can partake of its Wisdom. At this time she becomes known as crone or hag, words whose original meaning is ‘wise one’, a revered elder.  Wow…that’s far out!  I didn’t know the old hag I’m living with was a crone 🙂 **

liberating.  Take lack of testosterone for example.  Boy am I glad I’m running out of that shit.  They ought to classify that stuff as a dangerous drug.  No longer is the pursuit of poontang my first priority. It’s nice to have a clear head once in a while.  However, a little toke of testosterone before going to the Gym in the morning  would be nice.  I sure wish there was a testosterone plant that I could grow in case I needed a hit now and then.  But until that time, I will just have to look longingly upon my zucchini plants.

Being able to wear your favorite clothes everyday is neat.  If I don’t want to get out of my pajamas; I can wear em all damn day.  Same thing with shaving.  I’ve dragged a razor over my face for close to fifty years.  At first I thought that was cool because I’m becoming a man.  Now it’s just a pain in the ass.  Oh yeah…eating whatever you want, when you want is nice too.

Shopping is something one leaves behind after attainment.  Doesn’t mean you never buy anything, it’s just when you do, you go to exactly where it is, on which aisle, grab it and get the hell out of there .  Now a geezer Buddie of mine actually goes shopping with his wife!  But, here’s the good part, he never goes inside the stores.  He sits outside in his car and reads a book.  A win-win situation if you ask me.  And he’s doing something with his wife, other than that monthly, whether ya need it or not, marital bliss thing.

I must confess however that I actually went shopping with the wife.  She got it into her head that after twenty years we needed new furniture.  News to me;  my ass-print was firmly etched into my favorite sofa, so I saw no need for change.  So she dragged me to a Lazy Boy showroom.  I found a recliner, parked my butt in it, and the next thing I knew was we was buying a sofa and two recliners.  The ultimate in geezer heaven:  His and Hers recliners.  Now all we do is argue over who gets to have the remote.

So ya get the general drift of where I’m going with this (and it’s not down the tubes).  Fully embracing Geezer-hood is about freedom, being who you are, not giving a damn what others may think, being as care free as possible.  Livin’ life and havin’ fun.  Embrace Geezer-hood; give it a  a big hug; ya might find you like it.  Ladies, I’d caution you to make sure your Geezer has cleaned up a bit before giving him a big hug.

**Good thing the wife finds my blog not only embarrassing, but so offensive and vulgar that she never wants to read it.