Back To Lone Pine 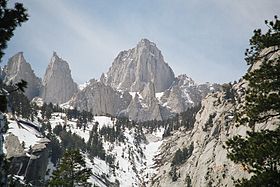 Lone Pine.  What two old geezers long for when ya need to release some steam, get outta the house, de-stress, and do what ya wanna do without first asking permission from The Wife.

A dream, a symbol of hope. A refuge to be sought after and achieved even in this life-time.  Lone Pine. Solitude, peace, a feeling of being at ease, comfortable at all times.  Something to savor, look forward to, and enjoy in all its fullness.  Lone Pine.

Well, we’re not talking about enlightenment here, but a small California town in the Eastern Sierras at the foot of Mount Whitney (the highest peak in the contiguous United States), and home of the Alabama Hills of movie fame.  From Lone Pine north up the Owens Valley, there’s many creeks running down from the snow capped mountains, into the valley and eventually into the Owens River (which is owned by the City of Los Angeles) which becomes the California Aqueduct, the source of water for L A and the south-land.  For some strange reason, I always enjoy peeing in the Owens River when up there.  Must be something nostalgic from my childhood and growing up in L A. 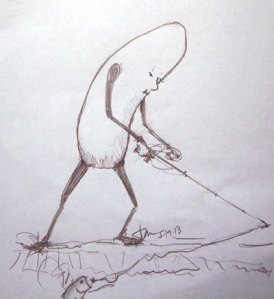 So there’s not only all this natural phenomenon and history up there, but fish (who also piss in the water).  And fish equals fishing, and so begins some of the best trout fishing all the way up California’s  Highway 395.

How sweet it is.  So old Hansi (aka Hot Dog Man) went up there last week with his fishin’ Bud.  Boy, did we ever have to take a leak.  A mental one that is.  I’d never urinate in someones water supply. Gawd knows what with all the fish shitting in it, not to mention cattle leaving huge ploppers, that water is unfit for human consumption. But peradventure a drop or two of geezer pee should dribble into the creek, you can rest assured that it’s Viagra free 🙂

I couldn’t stand it anymore and had to go to Lone Pine in the eastern California Sierras.  I go there to yank cold-blooded creatures out of their natural environment. Taking advantage of their voracious appetites and fascination with bright, flashy shining objects, I tempt them with food wherein are hidden barbed hooks, with which I snare them and suffocate them in a hostile atmosphere,  for the sole purpose of consuming their flesh.  This fiendish pursuit is more commonly known as fishing.  And eating fresh State of California Department of Fish and Game recently planted rainbow trout is sumptuous delight.

Well, the fishing was good, and so were the hallucinations.  These three pages from my psychedelic journal chronicle the event and are posted for your edification

There you have it and there it is.  I was looking over this post and realized: damn, I have an issue with work.   I think more fishing and less work is the answer.  Hallucinations optional.

It’s march already, and I haven’t caught a fish yet. I’m longing for Lone Pine. Lone Pine California that is, home of Mt Whitney, the beginning of the Eastern Sierras, and home of some of the best trout fishing in the Golden State.

Lone Pine is located in the Owens Valley, on Hwy 395. And that’s were the fun begins. The Dept of Fish & Game starts planting the creeks that run out of the Sierras with rainbow trout about this time of year, and I just love to catch those slimy little creatures.

Fishing is the number one geezer sport out there, and for good reason, cause fishin is just like sex: Once you get used to the feel of that little twitching at the end of your rod, you just want to do it again and again. Best part is, the fish don’t talk back or give ya a bunch of shit.

Now, there’s more to fishing than just yanking unsuspecting, yet greedy little creatures out of their natural environment, by deceiving them with food that actually contains sharp hooks, with which they become ensnared when thinking they’re about to get a meal, but in reality are about to meet their Maker.  It’s more of a Zen experience, almost meditative: the great outdoors, near a stream, alone with nature,  cigar in mouth and ice cold beer in hand.

When I go, my buddies and I usually stay at Tuttle Creek. It’s just outside of Lone Pine, behind the Alabama Hills, where a lot of 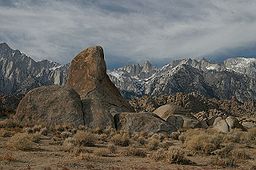 movies have been shot; the 1939 classic Gungha Din, being the most memorable. Tuttle Creek campground is an unimproved campsite, with no potable water. But, it’s spectacular in it’s views of both the Sierras and White Mountains across the Owens Valley. With the proper medication, it also becomes quite psychedelic.

Whenever I go to Tuttle Creek, I gotta stop by and see my Buddie Nick. Nick lives at the campground year round. He has an old Ford Econo-line type camper, but what’s inside is really a trip. Nick, who always lived on the fringes of society, was a machinist; “before all the damn jobs went overseas”. Inside, he’s got a wood burning stove and his own little jewelry workshop, complete with drill press, grinders, and a machine to roll out silver. Outside, he has his gas generator which powers a lathe, and multitude of other power tools. He makes silver jewelry and carves, local hard woods into everything from custom ax handles to pot pipes.  He’s the most resourceful guy I know.

There’s fishin to suit everyone’s taste around Lone Pine. I prefer creek fishing, stalking those stockers out from underneath banks, and shallow pools; some have been in the wild for as long as a day, before I catch em.  There is also a big sand trap outside of Lone Pine, where ya can just sit and slurp beer all day if you want. The local AA chapter is just down the street.

Further north on Hwy 395, you come to the “Geezer Creeks”, so named by my fishin bud Geezerpuss. These creeks flow out of the Sierras, but lay on flat land, which makes them easily accessible to huge motor homes. They park right on the edge of the creek, and usually come with a gray-haired couple, who have the same haircuts, dress alike, have at least two small yapping dogs, and commence to beer drinkin’ around 11:00 in the morning. Their idea of fishing is to set up a lawn chair on the bank and get wasted. After they are totally bombed, the Geezers usually retire to their queen sized beds and watch satellite television; resting up for the early evening session of drinking.

That’s really roughing it, but me and my Bud are usually busy getting wasted too, and retire to a cheap tent, which we proceed to fill with farts. Don’t get much better than that! That reminds me, I better get my license and head up there soon. The call of the wild beckons.