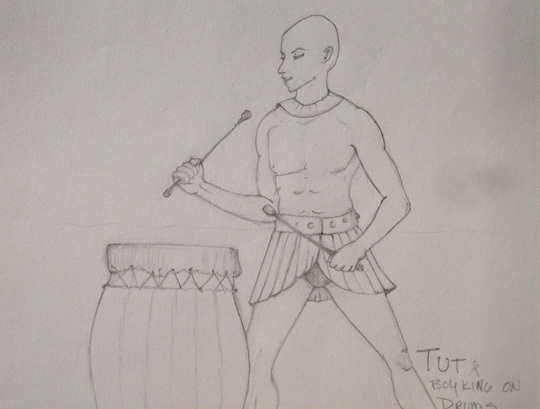 Boy. The shit has sure hit the old fan over there. Looks like it blew in from Tunisia, and could turn into a real sand storm which could effect Jordan and Saudi Arabia. Who would think that 30 years of the same old dictatorship and 25% unemployment could cause such a stir? Everybody (world leaders) are starting to freak out now cause, if the whole of the Middle eat goes berserk [again], what are we gonna do about our oil supplies and the lifestyle to which we have become accustomed?

This isn’t gonna be a Geo-political rant about the injustices suffered by the common people in the Arab world. Cause when I think about Egypt, I think about the Pyramids, the Sphinx, and…The Mummy. And not his latest incarnations, but the good old Boris Karloff and Lon Chaney Mummies. From Universal pictures. That was some scary-ass stuff as a kid. What I couldn’t quit understand though, is how anyone with two good feet could get caught by the Mummy. He was a cripple, with a bad leg he could only drag, and a left hand still wrapped to his chest after all these thousands of years… I always knew, “I”, could outrun that sucker, and if need be, just get a match, find a loose band aide he was wearing, and light his raggedy ass on fire. But thank god for clumsy female actresses who couldn’t take more than two steps before falling down screaming. They sure employed a lot of folks with disabilities at Universal.

But here’s the real part of this post, with a true story. Have you ever reflected on how fate, chance, or just plain dumb luck has save you from a world of hurt? Dig this: A fellow retiree buddy of mine decided to do an Egyptian tour when the climate over there is favorable: late January. So a few months ago he booked an Egyptian tour via an on-line travel service. I was excited for him, cause, I thought about an Egyptian tour a few years back when one first goes through the “let’s travel” phase of retirement.

Basically every tour is the Same. Cairo… up the Nile to Aswan, then back down by boat to Luxor. I wanted to do it, researched it on the net. Very doable; just click the ‘purchase’ button. But the thought of flying from LAX to Cairo, with probable stop at Heathrow, was more than my aging ass could take. We did New Zealand in 2006. 14 hours, LAX to Auckland..just a good sleeping pill away. I won’t mention the terror of immediately getting off the plane, and in somewhat of a drug haze, having to drive 200 kilometers on the Wrong Side Of The Road. I mean, you might as well have been driving backwards, it was so crazy. [did manage after a bit, and it wasn’t so bad drivin’ on the left hand side, it was just those turnabouts that got a little tricky.] So, 24 hours of traveling was not something I wanted to do, and it went no further.

Well, mid January rolls around and I call my friend, and Zoowie!!: They’re not going. What??? Seems like they discovered Trip

Advisor, and started reading reviews of the company that operated their tour, and….you guessed it …Bad reviews. Horror stories about lousy service, bad food, flies, and leaking cruise vessels. Long story short. They canceled the tour, even speaking to the Company president, and got a full refund of their money. [unheard of] It appears that the Company was getting such consistent bad reviews, that they were willing to refund peoples money; their business depending mainly on word of mouth referrals.

In Retrospect, and here’s the karmic/fate part, they canceled themselves out of a shit-load of suffering. I called him last Wednesday morning when I first saw the rioting in Cairo on CNN News. “You lucky mother f…er.” We both laughed our ancient asses off, cause on that day of the riot, he and wifey would have been in Cairo, at the airport, and no doubt willing to pay anything to get on a plane, and get the hell out of there. Funny how emotions can run from, “we’re Getting Screwed on this trip” to relief and some regrets about not going, to “We could have Gotten Screwed by Taking This Trip”. It’s really strange how things play-out; all we gotta do, is go along for the emotional roller coaster.